Stories behind the SCREAM

This website’s mission has the ambition of being a point of connection between all the SCREAM fans and everything revolving around the movie franchise. And, sometimes, extraordinary things happen in between. Like meeting people from all spheres of the fandom: other fans, actors and professionals that actually made those classic films. People like Theresa Donahoe.

Theresa is an actress in the San Francisco Bay Area who was a stand-in for Neve Campbell back in 1996, during the filming of SCREAM. And some of this amazing experience started appearing in the form of comments on our IG feed. So, we had to reach out and, fortunately, Theresa was very generous to enrich even more HelloSidney.com‘s content: with the original call sheets (that contain curious quotes from Wes Craven and Courteney Cox) and some fun stories. 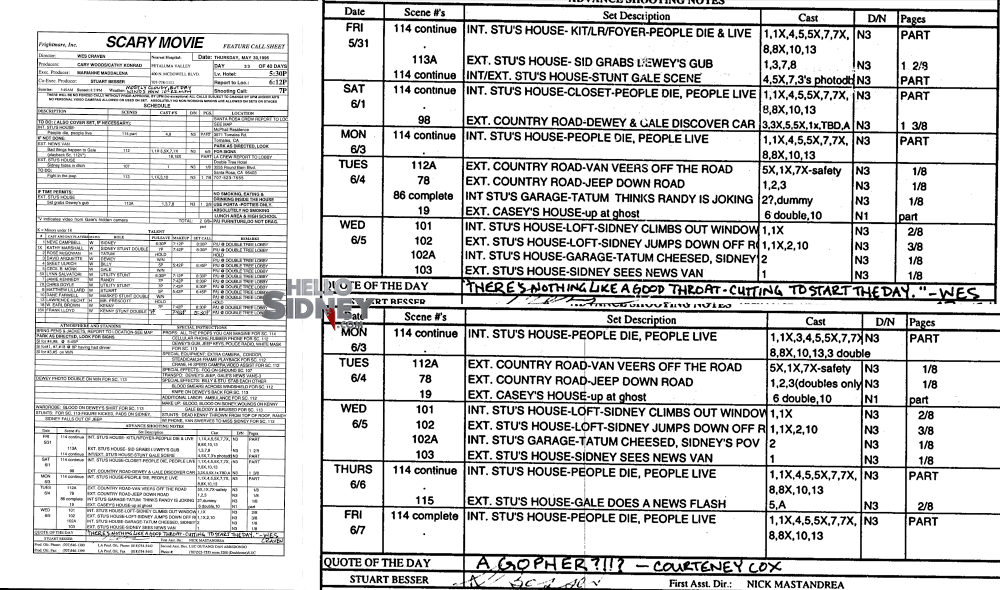 Excerpts of the call sheets of "Scary Movie".

Some people that are not familiar with the industry may not know the work and the importance of the Stand-In. Would you mind telling us?
A “stand-in” is a person on a movie set who mainly works with the camera crew and is of similar height, build, and coloring of the actor they are standing-in for. Because it can take a long time to light a room (45 minutes to an hour perhaps) or block a scene (rehearsal for the camera if there is a lot of movement) they use a stand-in to make sure the lighting is good for the actor, rather than just have the actor “standing around” for that long with a light meter in their face, when they could be getting their hair and make up done or going over their lines.

You have credits as stand-in (including “Zodiac“), but also publicist and actress. What do you enjoy the most?
Definitely acting. I have been doing theater since I was a little girl. But stand-in work has been invaluable in learning how filmmaking works.

How being behind the cameras affects your views of a movie?
It changes everything! In the case of SCREAM, I have specific memories attached to certain scenes. And because I saw how everything was done, the movie wasn’t scary to me at all when I first saw it because I didn’t have the element of surprise. I laughed through the whole thing. Because I remember the filming of it, sometimes I get distracted with my memories, like “Oh, it was really hot that day” or “I was so nervous that day” or “that was such a looooong night”.

In 1996 you were the stand-in for Neve Campbell. How did this come to be?
I had signed up with a local casting office in San Francisco to do extra work for film and television. I had only done some background work on a couple of movies when they called me and asked if I wanted to interview to be a stand-in for Neve Campbell for a film called, “Scary Movie.” I said “Who’s Neve Campbell?” And they replied, “Oh, she’s that girl from “Party of Five.”
I didn’t even know how to pronounce Neve’s name correctly. When I showed up to interview with the film’s second assistant directors in their production offices in Santa Rosa, I said, “Hi, I’m here to interview for NEEVE’S stand in” and they quickly corrected me, “it’s NEVE.”
Hey, I got the job anyway! 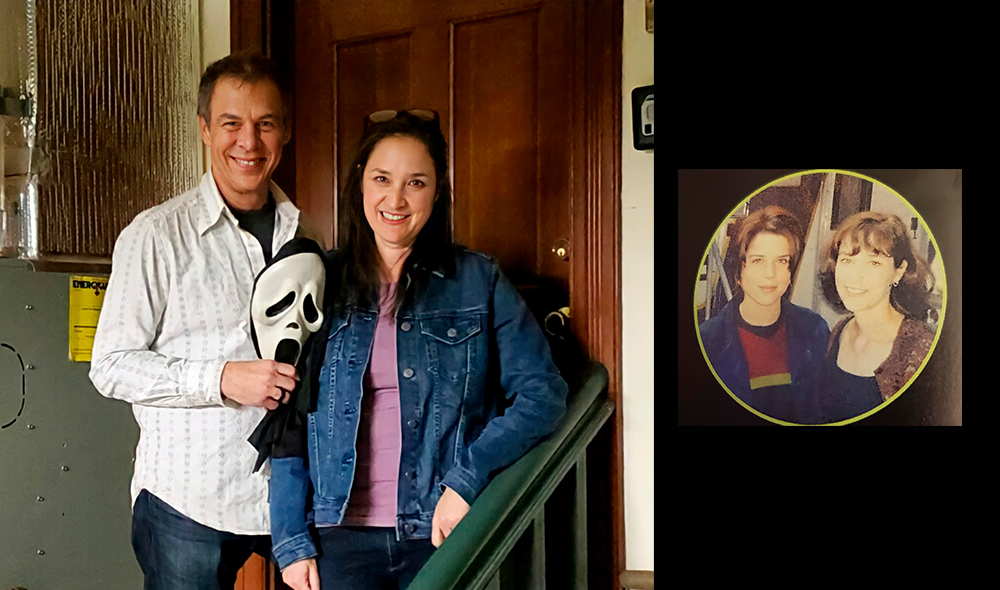 Theresa during SCREAMOWEEN and on the set of PARTY OF FIVE, where she repeated the experience of being her stand-in.

How was it working with that crew? Neve? Wes?
It was quite the learning curve at first because I didn’t know what I was doing. What was unique about this production was that because we were filming in the wine country, they decided to have a “pre-production wine tasting party” at a winery in Sonoma before filming started-so people could get to know each other. Since it was really my first movie, I had no idea this wasn’t common. So I show up at the winery and I just stand around because I didn’t know anybody. I didn’t even know what Wes Craven looked like, so I didn’t know to be nervous when I saw him. He was just some older guy wearing a purplish blazer holding a newspaper article. I came up to him and said, “hey can I see that?” And he kind of looked at me weird for being so direct, but he handed it to me and it was a story about how filming would be taking place in Santa Rosa and all the drama they had with the high school. Later on I realized it was Wes. None of the actors were there at the party, only crew. I got to know a few people.
Then when filming started I had to learn quickly what to do because no one really showed me, but I figured it out. On my first day of filming (the market scene where Sidney and Tatum are shopping before the party) Neve actually introduced herself to me and shook my hand. She was very nice. I became good friends with the girl who was Tatum’s stand-in, her name is Deborah Alexander. We both had to learn how to be stand-ins together during those first few days of filming.
Neve was very kind and somewhat reserved and easy to work with. Wes was rather quiet and I never heard him raise his voice. I didn’t actually work too much “with” him because stand-ins mainly work with the director of photography, who at the time was Mark Irwin, and then later on, Peter Deming. I did work with Wes when I had to do a photo double scene for Neve. Neve had worked a 12 hour day and she had to wrap, so they asked me to “put her sweater on and come upstairs”.
So I put on Neve’s gray sweater and went up to what was her bedroom for the scene wear ghost face chases her up the stairs and she slams her bedroom door. I am the one who slammed the door, so it’s my hand they filmed. That was the only time Wes ever said to me, “Action Theresa!” We filmed it a few times. I also think I typed on the keyboard for the 911 call, but I can’t quite remember. It had been a very long day, so it’s a bit of a blur.
My favorite crew member though, by far, was our first assistant director, Nick Mastandrea. He was so laid back and never seemed to stress out. I didn’t realize how awesome he was until I got on other movie sets where the AD’s were running around yelling at everyone. Nick never yelled at anyone. Neither did Wes.

What’s the best memory you have from this experience?
There’s a couple. Meeting Henry Winkler on the set where we filmed the principal’s office. It was in a warehouse in Santa Rosa and production had built a sound stage. There was also a basketball court there and people were shooting hoop in between takes. Henry Winkler actually approached me and said something like, “how did you learn to shoot like that?” I don’t quite remember what he said because all I could think of was “OH MY GOD, THE FONZ IS TALKING TO ME!!”
Also meeting and becoming friends with Courtney Cox‘s stand-in – her name is Joleen Nordstrom. We are still friends today. She really became my buddy after Tatum died in the movie because then I didn’t see her stand in- Deborah as much. 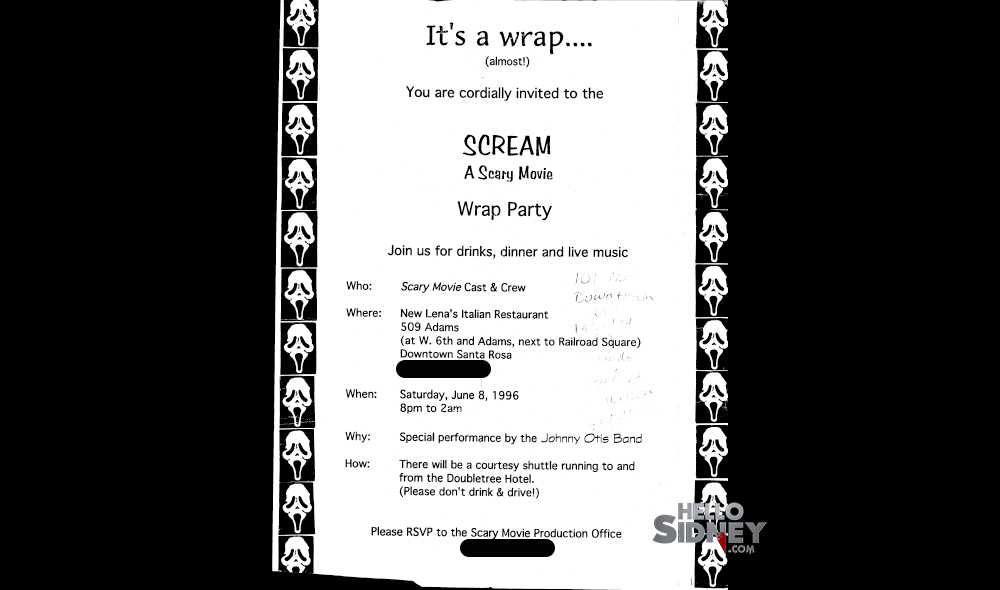 Do you have any trivia, some fun fact from the behind the scenes you could share with us?
I have so many stories. If you have any questions about any particular scenes, that will help jog my memory. One fun memory is when Wes was getting ready to film in the Freddy Krueger outfit, he started jumping up and down because he was making fun of all the actors who do that before they start filming. It helps to get their energy up.
Another time, when we were filming outside Stu’s house at night, it was FREEZING, so the onset dresser put a space heater outside and we all gathered around it. But one of the props people got to close to it and his pants caught on fire! I think his name was J.P. Fortunately for him, he had on long underwear underneath his jeans, so his skin didn’t burn, but he did have a hole in his pants.

Do you still have contact with someone from the crew?
Mainly Joleen (Courtney’s Stand-in)

How do you feel about SCREAM, that this year completes 25 years?
I am amazed it has become the gift that keeps on giving and I am so grateful to be part of something that gives people so much joy. I’ve done stand-in work on other movies, but none of them have become a big hit the way that SCREAM did. It really is amazing.

Get your SCREAM fix on the social network of your preference – stick with us, we’ve got you covered:

Action Figure: Movie Maniacs Series 2 Scream Ghostface RARE
Menu
This website uses cookies to improve your experience. If you continue to use this site, you agree with it.
Ok