I’ve liked scary movies since I’ve known myself as a person. Being an 80’s child, I was born into a world that was recently introduced to slashers like Halloween, Friday the 13th and Nightmare on Elm Street. It was a very defining time to the structure of the whole genre… And to me, because of the taste for horror that I’d acquired. 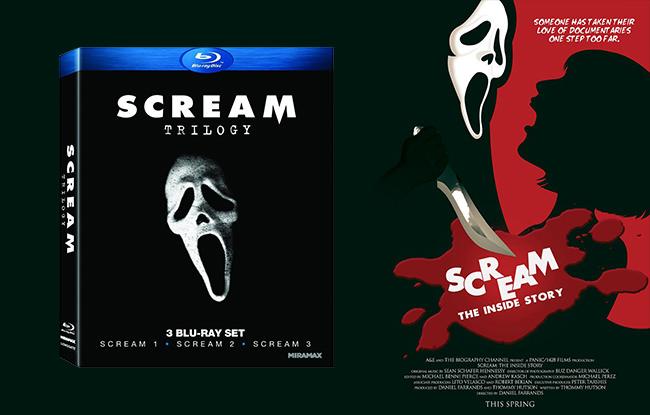 The poster I’ve designed for the doc SCREAM: THE INSIDE STORY, that ended up being printed on the official SCREAM TRILOGY BLU-RAY.

It was very concerning to my mother the fact that, not only her kid was addicted to seeing what she used to call “those sadistic bloody movies”, but he was renting it over and over. To the point that she even forbid, by a written note, the video store staff to let me come home with those horrid-VHS-that-dripped-gore. Specially Poltergeist.

Have in mind that it was a pre-cable-TV time, with no internet and to purchase a movie in Brazil – yep, I live here – you had to pay about $100/200 dollars per tape. But… Well, it wasn’t my mother who stopped me from getting my fix. It was the genre itself.

There was a time in the 90’s that no one was watching it because it was all the same… The passion became dormant.

If you are here, you’ve been there.

You thought Drew Barrymore was the final girl. You’ve also said loudly “Jason“. Laughed with someone watching The Exorcist and thinking about his girlfriend. Got suspicious of every single character. Identified with the talking, so much, that even felt that the movie was speaking to you. And felt satisfied when the killer came back to life, for one last scare, just to be shot in the head – because you know, that’s the one way to keep him down.
No need for introductions.

How “Scream” affected my life

“Scream“ was groundbreaking to me. It was literally a transcription of me and my friends, when we used to trivia each other over the seventh art. And to express this love, I’ve created my very first website, dedicated to these movies.

Since I became a web designer and movie critic for a local newspaper after that, I can say the movie changed my life, forever.

The “Scream“ website I did – Panico3.cjb.net – was very popular. Approached a lot of people, that even to these days, remain close friends of mine. And it was featured in several magazines and newspapers around the world – a surprise because it was in Portuguese. I managed to bring scoops to the major US “Scream“ sites of that time (Scream-Thrillogy.net and Scr3am.net).

But the adulthood came, and again, I was compelled to leave my passion aside. For a while…

When Scream 4 was greenlighted with Wes Craven, Kevin Williamson, Neve Campbell, David Arquette and Courteney Cox onboard, I knew I had to do something. This is how the website was rebooted.

It can’t get any better than that for a fan. Or can it?

One day I was contacted by Lito Velasco, producer of the great documentary Never Sleep Again. He was producing a new documentary called Scream: The Inside Story for Bio Channel and I’ve got the chance to not only provide the material and being credited for that, but to create some art for them.

The last time I’ve saw, the poster I’ve created to the documentary was stamping the official blu-ray of the Scream Trilogy.

In November 14th of 2020, I’ve done a video call with Neve Campbell herself.

This website wouldn’t exist – or wouldn’t be interesting at all – without the support of this fantastic people:

I’ll be forever grateful for this unforgettable experience!

My life, as a fan, came full circle, tonight!