Fans were eagerly waiting for a pivotal piece on the traditional marketing made for SCREAM: the full cast poster. And, since everything is new this time – considering the copyrights of the franchise changing from the hands of Miramax to Paramount -, no one knew if we would end up getting it or even if it would match our expectations.

It has finally arrived! And just like the other parts of the campaign, it has been an entirely good surprise all the way… 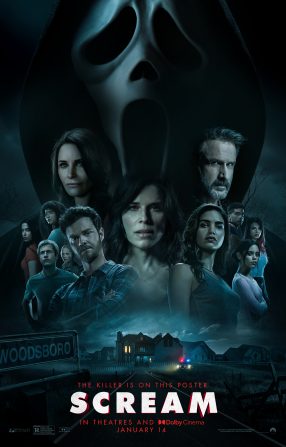 It bends the rules while giving us something that is nostalgic, spooky and modern at the same time.

The traditional posters of SCREAM were composed with a bigger element (usually a scared face) at the background and a V-shaped alignment of floating busts from the cast lead by Neve Campbell, David Arquette and Courteney Cox.

This one is surely influenced by the original, but has the “Marvel” grandiosity approach, showing even iconic scenery: 261 Turner Lane apparently it’s not so isolated anymore. Did it become a subdivision?

Another novelty is the tagline: “The killer is in this poster“. The element seemed too obvious for some because almost everyone from the cast is present and there’s a gargantuan Ghost Face at the back. But, it adds a funny pun to an all-so-serious crime scene, which is fitting: SCREAM is scary with the right dose of humor and metalanguage.

The release of the poster marks Day #1 of #12ScreamsForTheHolidays, where we’ll be getting a surprise per day from Paramount’s sensational marketing team.

I wanna play a game. Welcome to #12ScreamsForTheHolidays where we’re giving you a 🔪🩸😱 surprise each day. Only question is what 🎁 are you getting? #ScreamMovie - In theatres January 14. pic.twitter.com/zWTzsrNPf2

Did it get you excited? Tell us on your favorite social network!

Cool Stuff: Casey Becker Phone Prop Replica
Menu
This website uses cookies to improve your experience. If you continue to use this site, you agree with it.
Ok