SCREAM: Creators tell it all! (Spoilers)

SCREAM‘s directors, Matt Bettinelli-Olpin, Tyler Gillett, and producer Chad Villella must be relieved. After a long time of being unable to talk about certain parts of the film, now they can reveal some secrets.

And, man, there are lots of new cool trivia and Easter eggs that will make your next viewing much more fun!

And I’ll start with two major shocks: Stuart Macher was back(!). And so was Casey Becker(!!).

Alive? Nope. But as audio cameos. How cool is that? Matthew Lillard‘s voice was in two scenes. He was the voice of chrome Ghost Face in STA8, saying “this shit is lit” and also the one who shouts “Cool house Freeman” on the party scene.

“We thought was funny because it’s his house“, revealed Bettinelli-Olpin to Bloody Disgusting.

“She is the principal making announcements at the beginning of the movie when the camera pans down from the tree to find our new cast at the picnic tables”, told Villella.

And there are more OGs!

Jamie Kennedy is the one that says “Someone’s goofy ass dad is kicking us out” while Mindy and Frances are making out on the couch.

But, the party scene is where the major reunion happens, as Gillett tells:

“Henry Winkler, Adam Brody, Hayden Panettiere they all are a part of the toast, the “to Wes” toast, Patrick Lussier, Marco Beltrami, Wes’ widow Iya [Labunka]. We got everyone who knows Wes, including Julie Plec. Their voices are all in that big toast at the party at the end.”

Hayden Panettiere’s easter egg on Youtube, informing that she was indeed alive was a response to a divisive matter that can become very serious. Believe me. Gillett explains to Fandom:

“It would have felt weird to bring her back and just do something small and that it would actually distract you. If you had a scene that wasn’t a satisfying Kirby scene, then you’d spend the rest of the movie going, “F**k, when is she going to come back!? When am I going to get the thing that I expect to have from this character?” And so it made more sense to just provide a little nod to her on that YouTube page.” 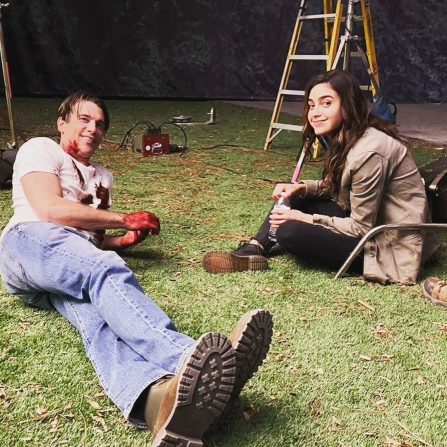 To many, Skeet Ulrich‘s cameo was a shock, and Villella explained to Fandom how was having him on set:

“Getting Skeet to set was an absolute blast. It was a day that we were on stage in the Macher house, which is Amber’s house in our movie. And he walked in and he walked through the kitchen and there were tears in his eyes. And we’re thinking, yeah, this is a pretty incredible and surreal experience not only for him but for us who grew up on the movie and love the movie more than anything to be able to stand in that kitchen with Billy Loomis. It was just the meta on top of meta on top of meta and we stand by it being the right choice for the movie and Skeet just honestly took it to the next level for being there one day, in one weekend“.

And there was a cameo that wasn’t. Gillett spoke to Variety that Rian Johnson was supposed to appear:

“We reached out and wanted to do a fake, ‘ET’/’Extra’ press junket thing with him,” Gillett said. “He was off making ‘Knives Out 2.’ So he had bigger fish to fry than our ‘Scream’ sequel.”

We all know the legend of Wes Craven saving Dewey not once, but twice. And, in this one, they filmed a version where he lived. Gillett and Bettinelli break the story down:

“We very begrudgingly got one shot that you could put some voiceover over, like, ‘He woke up from surgery, he’s gonna be fine. With no intention of ever fucking using it.”

“Just to describe the shot, it was it was an over-the-shoulder from behind Gale and Sid of a doctor’s legs. It was absolutely not really a usable shot.” 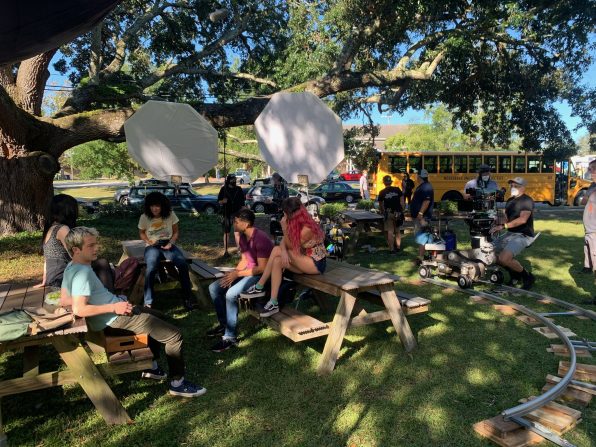 But there was a character that originally was killed off on the script and was resurrected at the last minute – exactly like David Arquette‘s Dewey did in the first two movies.

“Chad did not survive. We cast Mason [Gooding] after having a couple of zooms with him and he’s just the most wonderful person you’ve ever met and his energy is so infectious. It was a little bit like what happened to Dewey. He’s so good in the movie. He’s such the perfect choice for the character that we were like “We can’t kill him! He’s gotta stick around,” told Tyler.

On the Fandom article, there’s much more info about every one of that new info and discussions about some script bloopers and the usual who killed who discussion.

Book: Screams and Nightmares – The Films of Wes Craven

Underwear Men – Ghost Face – PSD
Menu
This website uses cookies to improve your experience. If you continue to use this site, you agree with it.
Ok