A queen of SCREAM

All the cultural fandoms unite people around a story, a person, a talent or a subject that somehow captivated them. They usually have a lot in common.

SCREAM is not an exception and I invite you to find yourself in some of those fantastic people I meet in the community.

Meggy Blaine is a super dedicated fan, and very active around the horror theme. From conventions to the collections she conquered it all – I mean, literally, don’t you recognize all those costumes, people and places?

Could you introduce yourself and tell us how SCREAM entered your life?

First I want to thank HelloSidney for having me! I feel honored to have been asked for an interview.
My name is Meggy Blaine, I’m 30 years old, and I live just outside of Chicago. In my spare time, I LOVE watching movies, especially horror movies. It’s my absolute favorite thing to do. In fact, I always watch at least 31 horror movies in the month of October. I usually manage to make it to 60. This year though, I wanted to set a personal record. At the moment, I’m on movie 86. I’m trying to break 100 by Halloween!

My favorite Scream movie is definitely the original. However, I will say Scream 2 follows closely behind. It’s the perfect horror sequel, in my opinion.

Scream is by far my favorite franchise. Next to JAWS, it’s the first film that truly impacted my life.

To this day, I still find Scream witty, scary, and entertaining. I think the line from Scream 4 nails it, “There’s something really scary about a guy with a knife who just — snaps.” Humans are capable of truly terrifying things. I think 2020 and the last few years have shown that. Sure ghosts, vampires, zombies, and supernaturally enhanced serial killers are all scary things. But the killers in Scream are real flesh and blood humans and that to me, is the scariest thing of all. People you know and trust can turn on you in an instant. Sidney unfortunately learns that very quickly.

It may not be as relevant as it once was, due to technological advances and times changing, but the story still resonates. I’m also very much here for the strong female characters Kevin Williamson created. Sidney, Gale, Tatum, Casey, all very much bad asses in their own right. As a young girl watching this film for the first time, their strength had a huge impact on me.

Are you in contact with other fans? How is being part of this fanbase/fandom?

I’m in contact with lots of fans and have been since about 2010. I used to chat with fellow fans on the USMB message board. Those were good times! Now I keep up with fans and Scream news through Facebook groups. I actually met my best friend of 10 years, Robert Scott Bean, in late 2010/early 2011 through Twitter. We found each other through discussions on Twitter about Scream 4 and pretty much haven’t gone a day without talking since. I’m so grateful Scream brought us together. I’m also close with my friends Jordan, Jenna, and Destiny because of Scream. It’s crazy to think how a series of films can impact your life so much, including bringing you together with some amazing people.

I truly love being a part of this fanbase and wouldn’t change a thing. Well, except maybe the people who like to post spoilers. Don’t make me pull a Mrs. Loomis and get a little knife happy. 🙂

Have you and your family been in horror events?

Yes, my husband and I actually attend horror events quite frequently. My two favorite events that I’ve attended thus far are Screamoween and On Set Cinema.

Screamoween happened earlier this year on March 14th. It was originally scheduled for Halloween 2019, but due to the wildfires in California at the time, it was moved to a later date. Screamoween took place at Stu’s house from the original film. Fans could come and take a close look at the property, along with partying in the house with fellow fans. This was the second event hosted there by Anthony Masi and Nate Ragon. Their first event was called Scream Comes Home. I truly hope they are able to host more events there in the future. It was a night I’ll never forget. 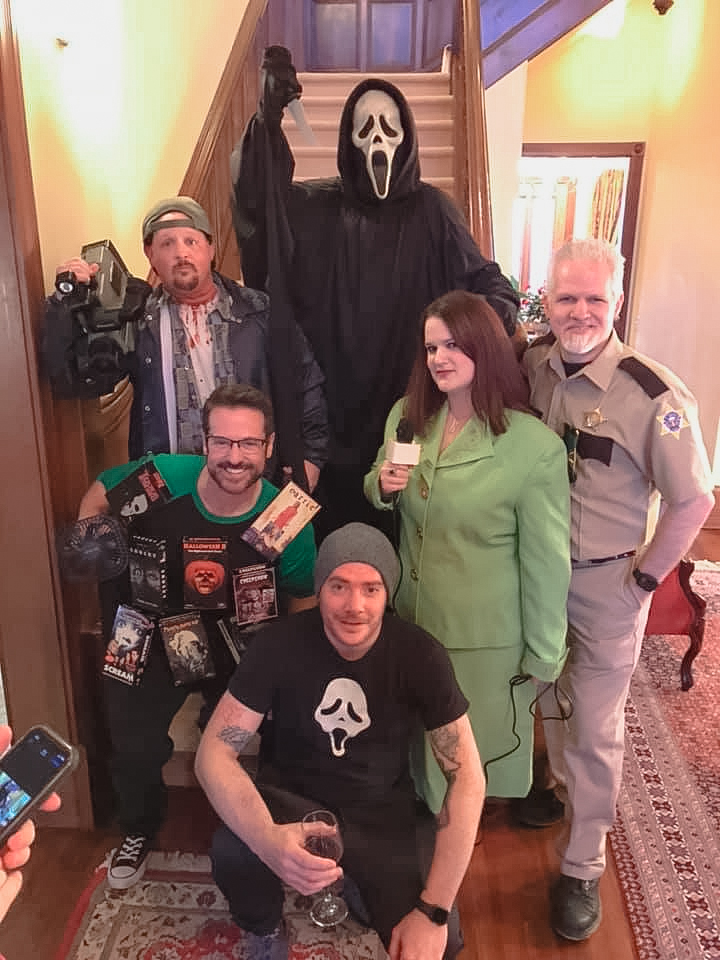 The house alone is gorgeous and takes your breath away, but the land it’s on is even more beautiful. Even if this house hadn’t been used in Scream, I’d still sell my soul at a chance to own it. There’s a line in Scream spoken by Stu about the fiesta he’s throwing, calling it an, “Intimate gathering, intimate friends.” That’s exactly what this event was and I loved every second of it. It’s been the best part of 2020 for me and I’m very grateful for the experience.

On Set Cinema hosts several horror events and screenings throughout the year. I attended their Scream 2 event in April of 2019 and to say the least, it was a SCREAM! Attendees got to visit, “Windsor College,” the main filming location for Scream 2. I actually brought my Scream 2 screen worn wardrobe pieces to the event for the fans attending to see. I loved seeing their reactions when realizing those were the actual costumes used in the movie. Actress Elise Neal, who played Hallie in Scream 2, was a guest of the event. She met with fans, signed autographs and took pictures in the gazebo seen in the movie. Along with Elise, a huge highlight to the event was eating lunch in the same cafeteria Derek sings to Sidney in. I shared that experience with close friends of mine and it’s a moment I’ll never forget. Very surreal.

Have you met any of the actors of the franchise? What is your favorite memory of those encounters?

I’ve actually met the entire cast of the original movie, including side characters. However, I have not had the pleasure of meeting Drew Barrymore. She’s definitely on my bucket list, along with Timothy Olyphant.

Wow, picking a favorite encounter is hard. I have so many to choose from! My favorite would probably have to be Neve Campbell’s first convention appearance at Texas Frightmare in 2015. I honestly never thought I’d have the chance to meet her so when it happened, it was a dream come true. I attended that event with my husband and several of our friends, which made the experience even better.

How did your collection start? What was the first item?

For the longest time, I rented the films at Blockbuster before they were gifted to me in the DVD box set at Christmas 2003. I shortly bought posters for all 3 original films and my parents had them framed for me. I was in LOVE with how they looked and knew I had to have more merchandise. So I’d say my posters were my first item and they were the reason I started collecting. I just wanted anything and everything in my bedroom to be Scream related after that.

My favorite piece is probably my original Scream British Quad poster, signed by 90% of the cast. I’m only missing Drew Barrymore and Courteney Cox, which is sad because I’ve actually met Courteney twice now. I just didn’t own that poster at the time. 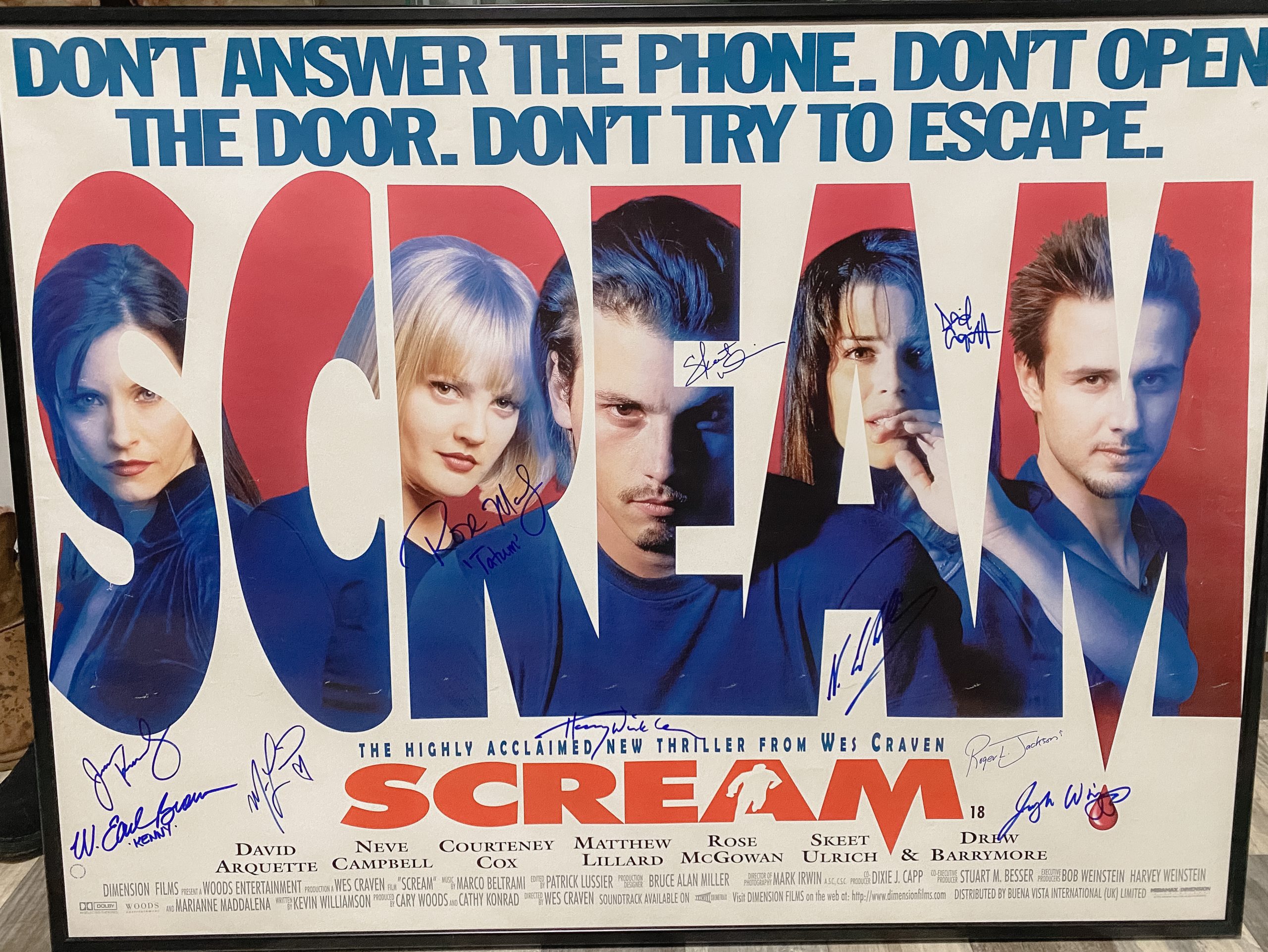 What would be a holy grail to your collection? Is there something you would love to have?

The holy grail to my collection would probably be Sidney’s outfit used in the final scenes of the movie. It’s so iconic. I’d also love a screen worn Ghost Face mask. That would be pretty killer. 🙂

Is it possible for other fans to see it closely?

Fans can see my collection on my YouTube page, MsScreamqueen89. I’ve recently gotten back into uploading videos after purchasing new screen worn wardrobes from Scream 4. I plan to start going through my collection piece by piece and doing individual videos of each item. It’s hard to cover an entire collection in one video. I figure this might be a more intimate and helpful way for fellow collectors to find pieces they’re looking for. So stayed tuned for new collection videos coming soon!

What advice do you give for someone who’s starting a collection now?

My advice is to have patience. Collecting takes time and it’s usually worth the wait. Keep an eye out on eBay, you’ll never know what may pop up there. Thrift stores are also a good place to look, especially around Halloween. There are several Facebook groups out there for Scream collectors to sell and trade items. Join one of those and see what you can get your hands on!

Could you give us movie tips of other scary movies you like?

My favorites include the following, excluding Scream of course:

The Creature From The Black Lagoon (my favorite Universal Monster);

There are many other films and franchises I enjoy, but I feel like this assortment gives you a bit of everything. If you watch any of these for the first time, enjoy! 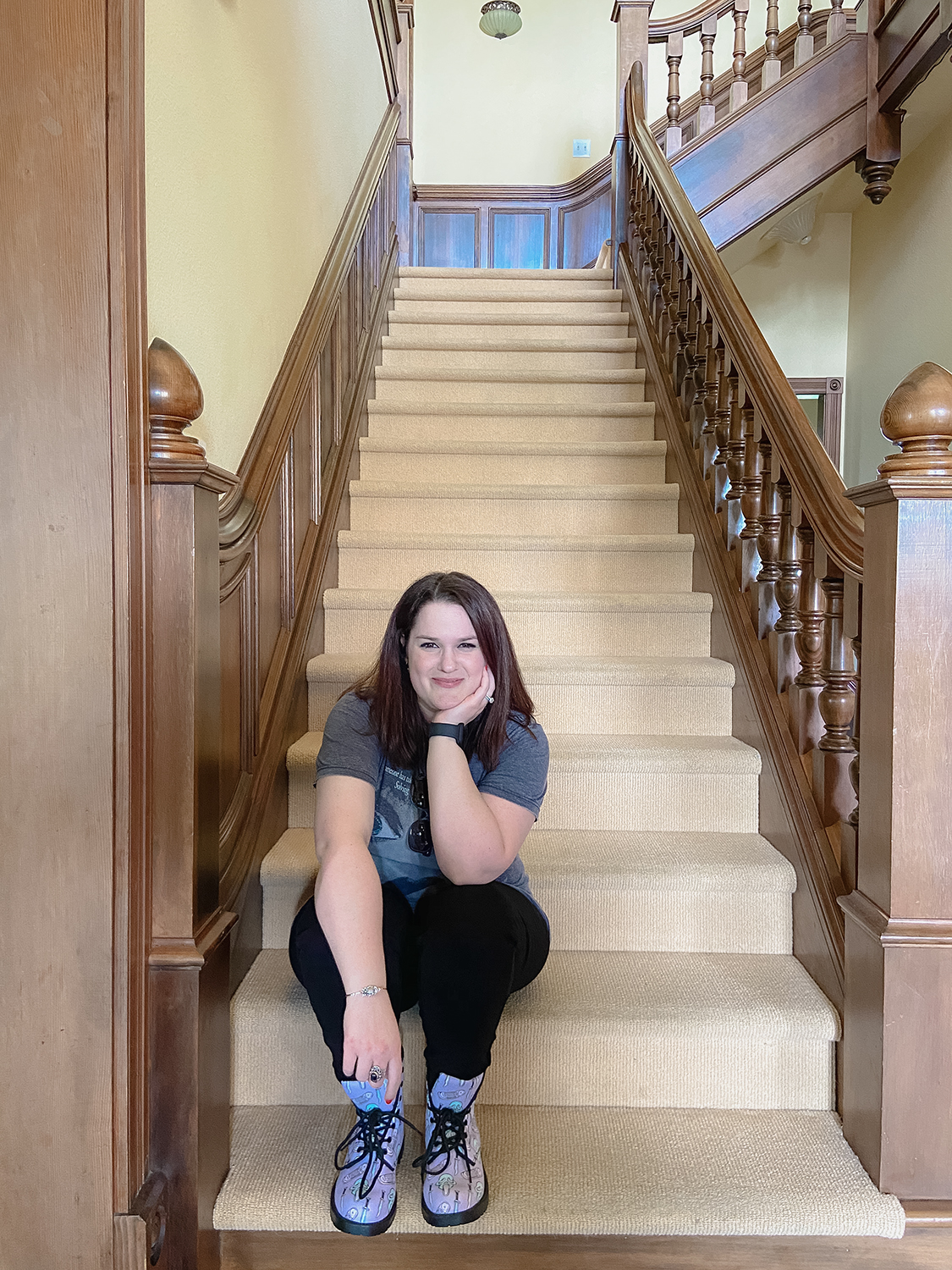 What are your expectations for SCREAM 5?

I’m keeping my expectations some where in the middle. I don’t want to get myself overhyped, just to be gutted with disappointment. I do believe they chose good directors for the film and interested to see what they do with this installment. Either way, it’s really nice to have SCREAM and Ghost Face back in the limelight for a while.

What are your plans for Halloween 2020?

I plan to pass out candy to our trick or treaters, safely of course. After that, I’ll be snacking on Halloween themed treats and binge watching as many horror films as possible. Stay safe, everyone and have a Happy Halloween!

Magazine: Rolling Stone – Scream 2
Menu
This website uses cookies to improve your experience. If you continue to use this site, you agree with it.
Ok